Course Schedule for September to December 2021

Dates don't suit? Contact us with your requirements, StayAhead is renowned for it's flexibility!

Join live instructor-led classroom training from the comfort of your home or office.
All the convenience and benefits of the classroom experience without the hassle and costs of travel and accommodation.
Live Virtual Classroom
3 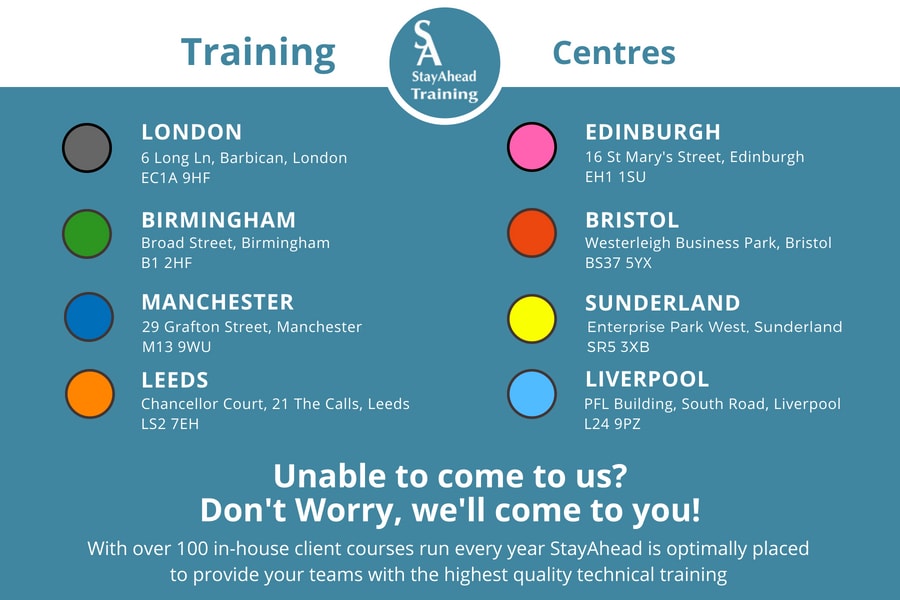 Hypertext Markup Language (HTML) is the standard markup language for creating web pages and web applications. With Cascading Style Sheets (CSS) and JavaScript, it forms a triad of cornerstone technologies for the World Wide Web.

Web browsers receive HTML documents from a web server or from local storage and render the documents into multimedia web pages. HTML describes the structure of a web page semantically and originally included cues for the appearance of the document.

HTML elements are the building blocks of HTML pages. With HTML constructs, images and other objects such as interactive forms may be embedded into the rendered page. HTML provides a means to create structured documents by denoting structural semantics for text such as headings, paragraphs, lists, links, quotes and other items. HTML elements are delineated by tags, written using angle brackets. Tags such as <img /> and <input /> directly introduce content into the page. Other tags such as <p> surround and provide information about document text and may include other tags as sub-elements. Browsers do not display the HTML tags, but use them to interpret the content of the page.

HTML can embed programs written in a scripting language such as JavaScript, which affects the behavior and content of web pages. Inclusion of CSS defines the look and layout of content. The World Wide Web Consortium (W3C), maintainer of both the HTML and the CSS standards, has encouraged the use of CSS over explicit presentational HTML since 1997.

HTML 5 (formerly spelled HTML5[a]) is a markup language used for structuring and presenting content on the World Wide Web. It is the fifth and current major version of the HTML standard, and subsumes XHTML. It currently exists in two standardized forms: HTML 5.2 Recommendation by the World Wide Web Consortium (W3C, a broad coalition of organizations), intended primarily for Web content developers; and HTML Living Standard by WHATWG (a small consortium of four browser vendors), intended primarily for browser developers, though it also exists in an abridged Web developer version. There are minor conflicts between the two groups' specifications.

HTML 5 includes detailed processing models to encourage more interoperable implementations; it extends, improves and rationalizes the markup available for documents, and introduces markup and application programming interfaces (APIs) for complex web applications. For the same reasons, HTML 5 is also a candidate for cross-platform mobile applications, because it includes features designed with low-powered devices in mind.

Cascading Style Sheets (CSS) is a style sheet language used for describing the presentation of a document written in a markup language like HTML. CSS is a cornerstone technology of the World Wide Web, alongside HTML and JavaScript.

CSS is designed to enable the separation of presentation and content, including layout, colors, and fonts. This separation can improve content accessibility, provide more flexibility and control in the specification of presentation characteristics, enable multiple web pages to share formatting by specifying the relevant CSS in a separate .css file, and reduce complexity and repetition in the structural content.

Separation of formatting and content also makes it feasible to present the same markup page in different styles for different rendering methods, such as on-screen, in print, by voice (via speech-based browser or screen reader), and on Braille-based tactile devices. CSS also has rules for alternate formatting if the content is accessed on a mobile device.

StayAhead Training offer a range of Java courses. All StayAhead Java courses can be modified or tailored for delivery on your premises.